This award is given in each edition during the Day for Cuban Culture (October 10-20), and according to a CNCC press release, it has proposed the exceptional delivery in 2021 of such important recognition with several objectives.

It highlighted among them, to stimulate and recognize the contributions in community cultural development and the contribution to the improvement of the quality of life of the population from cultural and social processes generated in, by and from the community.

After an official evaluation session and exhaustive analysis of the nominees' dossiers for the 2021 National Community Culture Award, the jury decided to award it in the Personality category to Silvio Rodríguez, in the Grouping/Institution category the Teatro Los Elementos, and in the Project category  the Clave de Sol Vocal Guitar Orchestra.

Among the reasons stated in the minutes to award Silvio Rodíguez, the jury noted that the composer since late 2010 leads a group of musicians, writers and artists who perform in the most needy neighborhoods and social institutions (schools, prisons, among others) in the city of Havana and other provinces of the country.

In addition,since this initiative was put into practice, it has not ceased to move hundreds of people, who without measuring distances, follow him to enjoy a unique experience in which singing and poetry, intertwine with feelings, reaching incalculable dimensions, and that undoubtedly, this has been a work of high social and cultural impact on a community scale.

Regarding Teatro Los Elementos, a group founded in 1990 by José Oriol González, it stressed that the company has become a stable artistic community, which deals with classic authors of the universal and Cuban repertoire without ceasing to work on the memory of the Cuban countryside and the elements that enrich it. 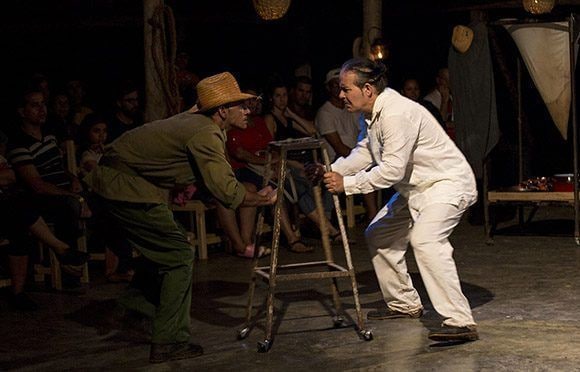 Teatro los Elementos is a reference for community work in the country's mountainous and highland areas, articulating artistic work and cultural promotion with sustainable agriculture and the traditional ways of life of Cuban peasants.

The Clave de Sol Vocal Guitar Orchestra, was founded on May 2, 2009, by two music teachers from the capital's La Lisa municipality (Yamilé García Zurita and Nuria García Reyes), with children and adolescents from the community of San Agustín.

The project has meant a cultural revelation for San Agustín, with a scope that exceeds 250 members and therefore 250 families, with results recognized at national and international level, detailed the CNCC.
Cuba National Community Culture Award 2021

Cuban Culture Day to be held in Cruces

Several virtual and in-person activities will be held, starting on October 10, the date that marks the 153rd anniversary of the beginning of the struggles for Cuban independence with the uprising in La Demajagua, led by Carlos Manuel de Céspedes.

To commemorate this important event in the history of the homeland, at 9:00 a.m. on that day, the inauguration of the day will take place at the José Martí Park in  town.

Likewise, the Gallery is preparing the "Cubans in Network" Expo, starting at 11:00 a.m. that same day.

The Enrique Cantero Ibáñez House of Culture is organizing the Expo "Flashes of Cuban Art" at 10:00 a.m. on the 11th in its main hall. In the afternoon, the Literary Review will take place at the same facility.

The Day of Cuban Culture will close as usual, after an extensive program of activities reflected in social networks and with the participation of little public, due to the covid-19, on October 20, the date on which is celebrated the first time that the National Anthem was sung in Bayamo, being marked on the calendar as Day of Cuban Culture.

For this date, the municipal direction of Culture in Cruces, planned the closing Gala, in the Aparicio Theater at two o'clock in the afternoon, where there will be a representation of all cultural institutions.

As part of the celebrations for the 59th anniversary of the Guiñol Theater  group Cienfuegos, to be held on October 18, its members are developing promotional initiatives and are taking the first steps in what will be the next premiere, according to its general director Daymani Blanco Serra.

The Southern Theater Company, the first one founded in the territory after the triumph of the Revolution, is currently offering to the different audiences the Digital Bulletin "Lo que trajo la Ola", a material to socialize the history of the fifty-year old group dedicated to children, while preparing the new staging of the play "Caperucita" (Little Red Riding Hood).

Blanco Serra told the radio that the Digital Bulletin, "Lo que trajo la Ola", with about 6 printings and a weekly output, will review part of the history of the Guiñol group. The content is available from the group's Facebook profile, as well as from the Provincial Council of Performing Arts and on the different platforms of the provincial directorate of culture.

The Guiñol  Cienfuegos Theater Group was founded on October 18, 1962, in the Provincial Library located at that time in the current Government House in Martí Park.

Its official and definitive debut was on that stage and its main character was the cow "Queta", which from then on was the central axis of several shows. Then, they offered performances every weekend at the library itself and at the Terry Theater. They also performed at the Círculo Infantil "Jesús Villafuerte" which was the first and only one created up to that time in 1962.

Currently, the headquarters of the group since 1978 is located on 37th Street between 54th and 56th Avenue (between San Fernando and San Carlos), this being one of the main arteries of the city, in front of the Prado de Cienfuegos.

There are some people who say that in the keys from the Bay of Cienfuegos the pirates made fabulous burial with large treasures from their attacks, but up to now these treasures have not being found.