A total of 18 young writers were recognized with mentions or awards in the Calendar Award, the most important award given each year by the Hermanos Saíz Association. A prestigious jury in the different categories evaluated the 196 works in competition.

As announced today on the organization's social network profiles, in the Narrative category, the loudest applause went to Geonel Alejandro Rama Alemán, for his work "Sinfonía de las cavernas"; while Carlos Ávila Villamar received a mention for "Fósiles". 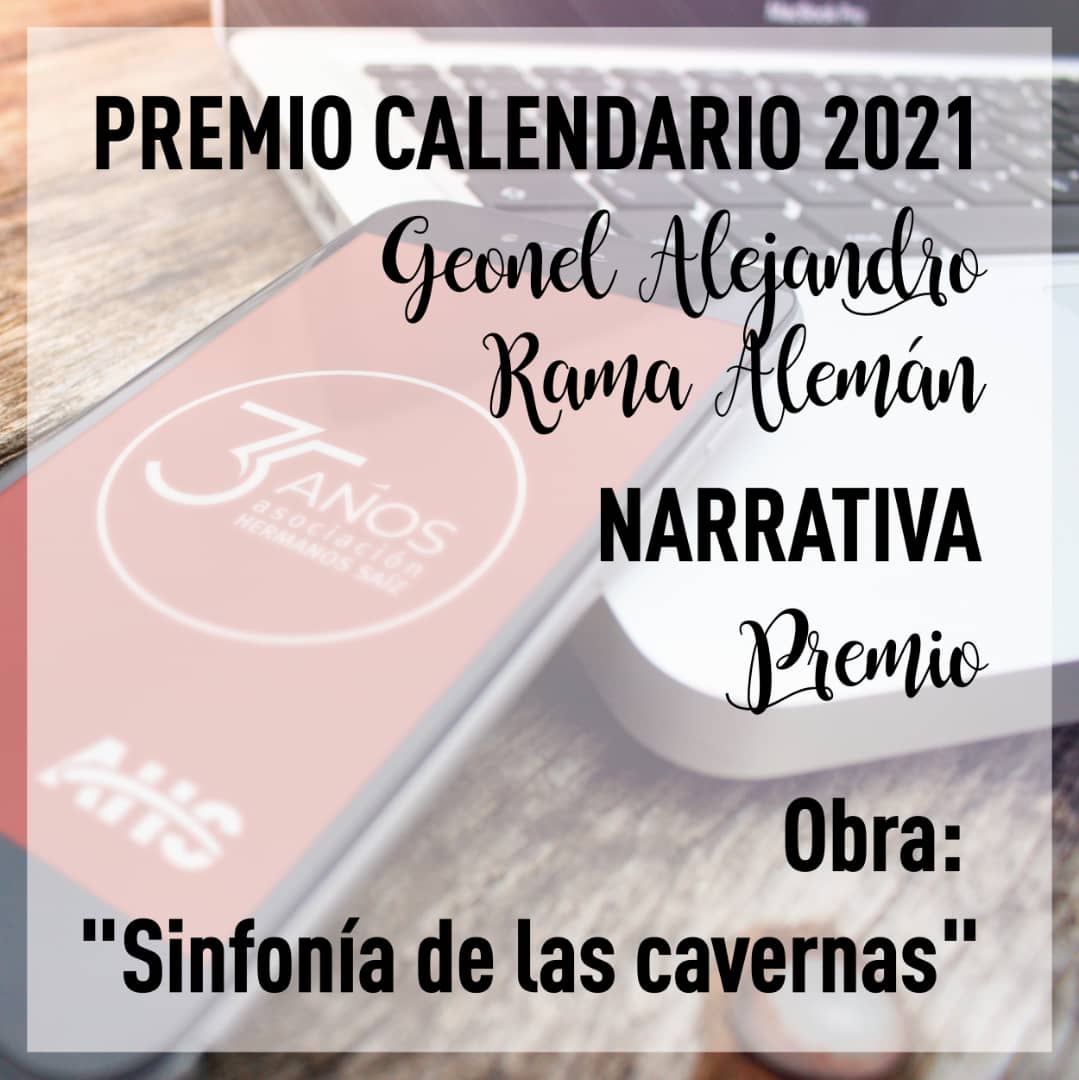 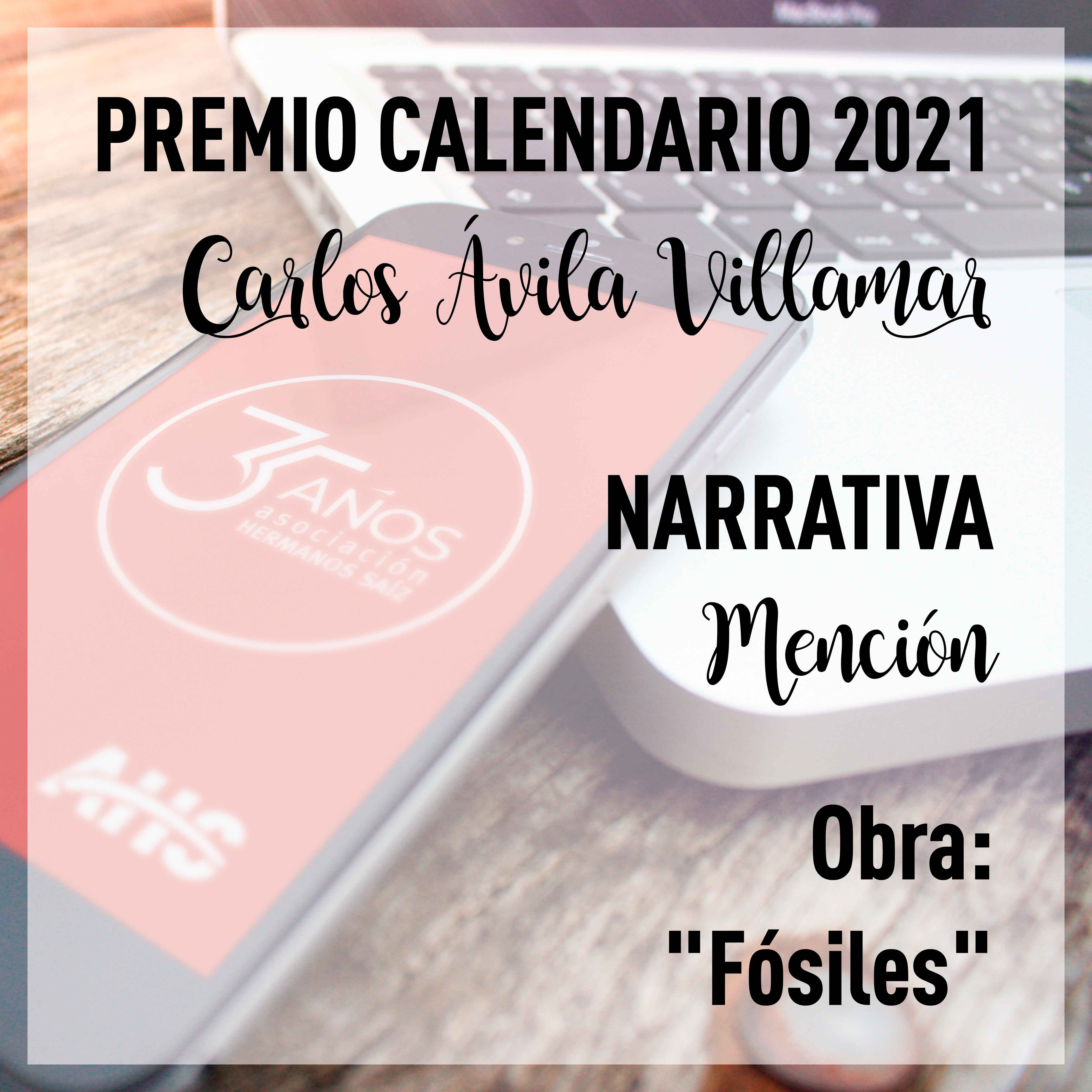 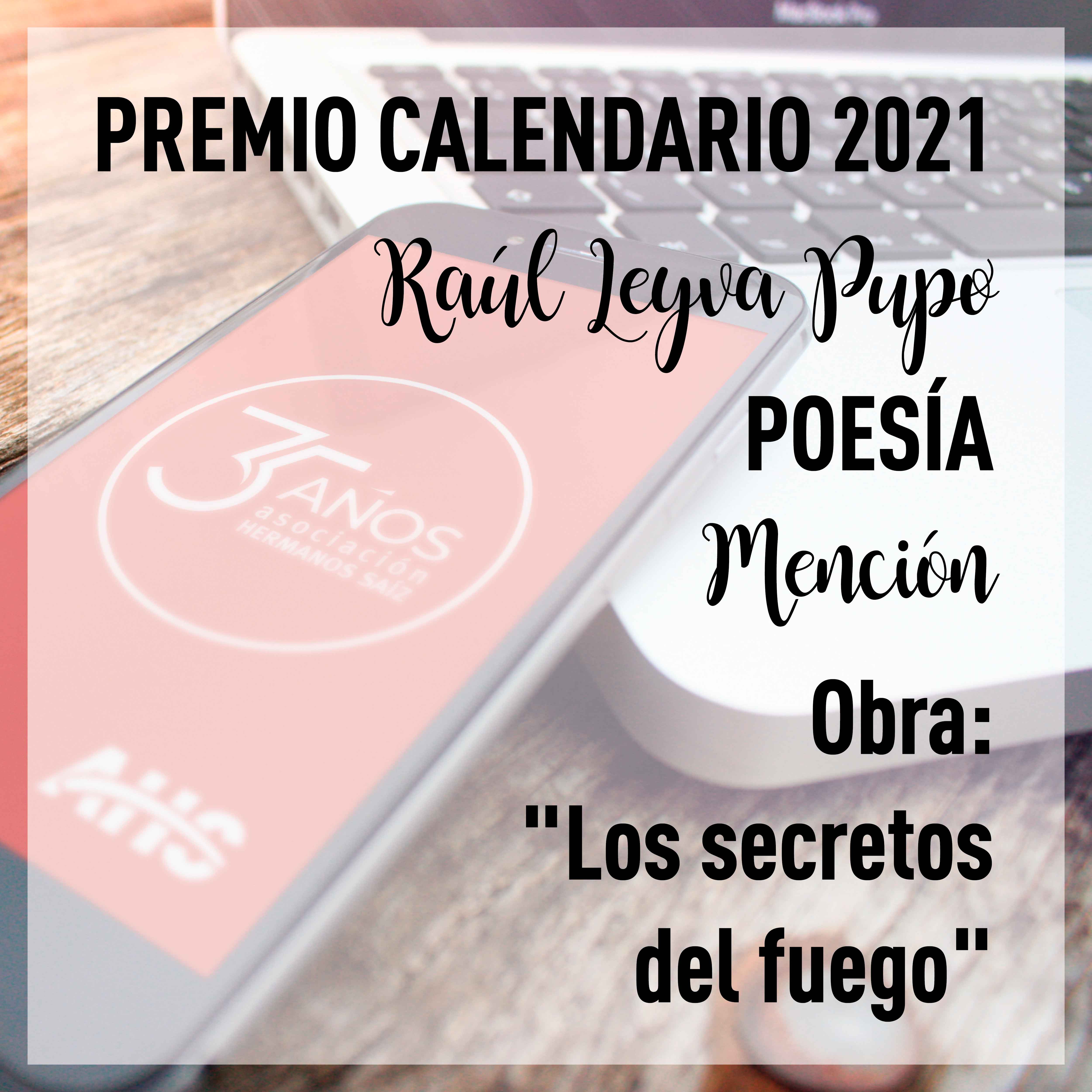 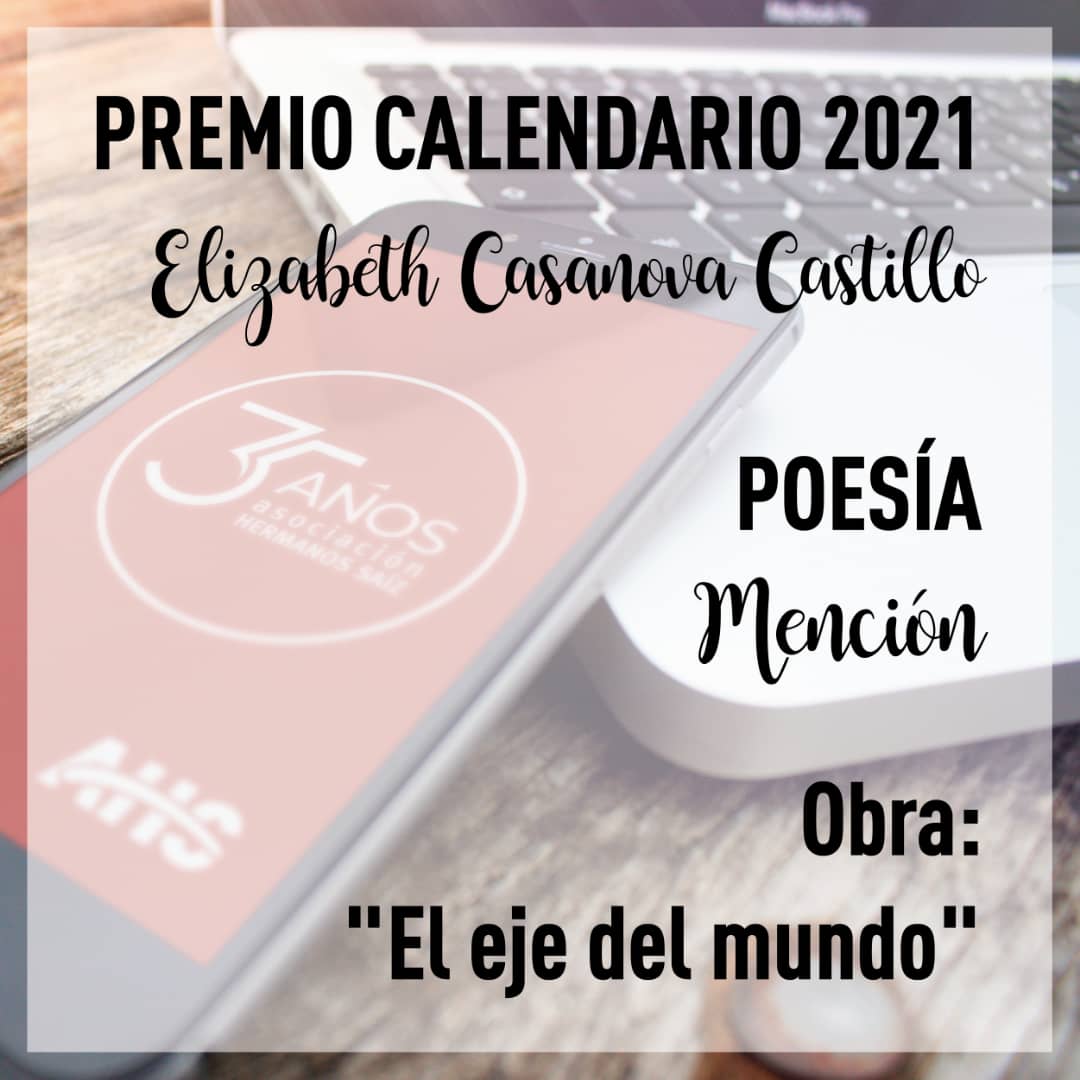 In Theater, the absolute prize went to Marcel Méndez Fariñas for the play "Los estultos". 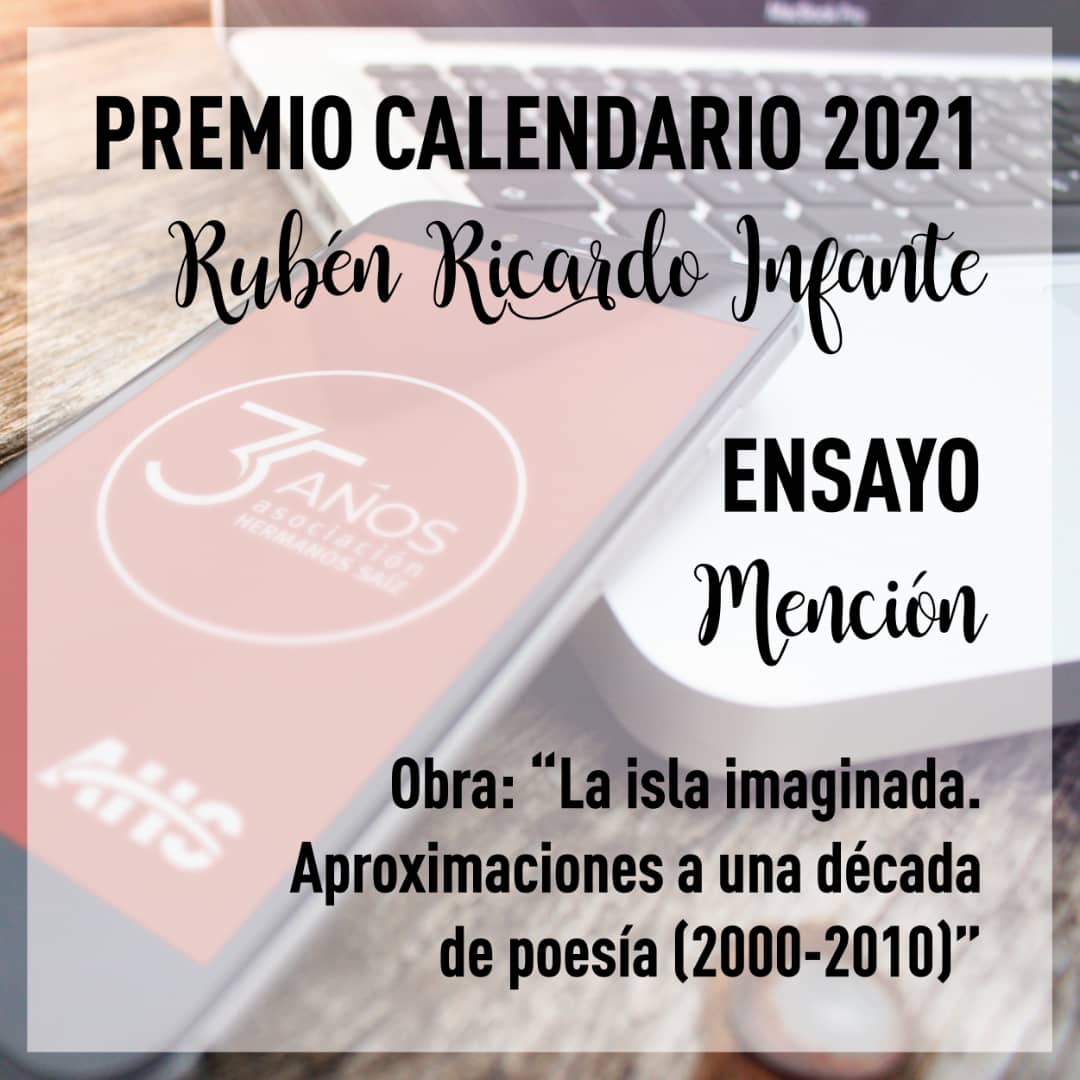 Due to the epidemiological situation caused by Covid-19, for the first time the Calendar awards will be announced online only. When the circumstances allow it, the award ceremony will be held, as well as the presentation of the printed books, winners in the 2020 edition.

On the 28th day of the month of December 2020, the jury of the contest Science Fiction and Fantasy Calendar 2021, composed of Raul Flores, Carlos Duarte and Raul Aguiar decide, unanimously, to award:

Award to:A la sombra del mundo hogar, by the author with the pseudonym "Elessar", who when opening escrow responds to the name of Raúl Piad Ríos, for the excellent handling of narrative resources, in a novelette that surprised the jurors since it seems written by a professional author, with impeccable cleanliness and editing, and that offers us a story that shares in a very effective way the thematic elements of space travel with the cyberpunk subgenre, in the best style of a William Gibson.

Likewise, the jury decided to award a mention to the book El símbolo del silencio, by the author with the pseudonym "Axel", who upon opening the envelope responds to the name of José Alejandro Catallops Vázquez, for a very well written book with an original theme, a heroic fantasy novel where the magic linked to tattoos is recreated in a very well structured worldbuilding or constructed universe with interesting characters and conflicts.

The jury also congratulates the organizers of the contest for the large number of authors who decided to send in this category of fantasy narrative, as well as the happy idea of convening online, which we believe facilitated the increase in the number of participants and the quality of many of the works submitted.

And for the record, the following sign the present minutes

To recognize, taking into account the wide level of call for entries, the vitality of the Award as a space of stimulation for young playwrights in Cuba.
To highlight the quality of the works in competition which, in clear proportion to the number of participants, suggests a very favorable state of the art for current Cuban playwriting.

Finally, the Jury, after extensive reading and discussion sessions, unanimously decided to award the 2021 Calendar Award to the text: Los estultos, which under the pseudonym Erasmo Büchner, presented in competition Marcel Méndez Fariñas.

Los estultos is a work that stands out for the imagery with which its author manages to establish discursive (and categorical) bridges with Woyzeck, the enigmatic play by Georg Büchner, and one of the great ghosts of theatrical historiography and contemporary dramaturgy. Los estultos subverts its historical referent through a very personal process of contamination of the reality it approaches, creating a parodic device from the everyday and from the theatrical, subversive. Its author appeals with intelligence, from the enunciation itself, to the standards of the mechanisms of dramatization of the avant-garde and post avant-garde, creating a novel framework both from the language and the characterizations, as well as from the self-sufficient proposal of staging to which it aspires.

On a poetics of vanity or the purpose of banality as poetics. Possible questions from others that become one more. The author has dissimulated the ghost to legitimize it again, and in that healthy abomination of "new man", to constitute an a-historical creature, potentially dangerous.

With the executive production of "Empresa de Grabaciones y Ediciones Musicales (Egrem)", the documentary José Loyola. Con la charanga en la sangre, dedicated to this notable exponent of Cuban music, founder of the Charanga de Oro, who was born in Cienfuegos on February 12, 1941 and celebrates its 80th birthday today.

Bárbaro Cabezas García, director and assistant director of the audiovisual, said that in 2018 the idea of filming it arose to leave a record of Loyola's legacy to the Cuban sound panorama and cultural imaginary, from his contributions to the flute, to the classic format of the charangas, as well as to concert or academic music.

Through Egrem we gained access to the artist's whole story and conditions are already being prepared for its upcoming premiere in Havana, and then in Cienfuegos. The documentary is directed by another Cienfuegos native, Alberto Padrón, and features music by Kiki Corona," he added.

This week the filmmakers were putting the final touches to the work, which was produced under unusual circumstances. The Covid-19 pandemic forced the team to keep in touch and work on some video cuts through social networks, with the same seriousness even though it took much more time.

Cabezas García stated that this film product connects with Las huellas de un charanguero, a previous audiovisual that delves into the life and artistic career of Efraín Loyola, one of the architects of the distinguished Orquesta Aragón and father of José Loyola.

"The intention of the record company -he said- is not only to make it a piece of historical and patrimonial value for the new generations; it also values the possibility of commercializing it in Cuba and abroad due to the interest aroused by the figure to whom it is dedicated, a reference for great flutists of the country such as José Luis Cortés, Orlando "Maraca" Valle and René Herrera".

After eight decades of life, José Loyola transcends as one of the most important musicians of the island. He was the creator and president of the Boleros de Oro International Festival, professor at the Instituto Superior de Arte (Isa), and is one of the few doctors in Music Theory in the nation.

Local development project to be developed in Jagua Castle

Cienfuegos will be strengthened by the implementation of the local development project "Ruta Jagua", which will connect the city, a World Cultural Heritage Site, with the Fortress of Our Lady of the Angels of Jagua and the network of adjacent communities.

With the support of the United Nations Population Fund, UNDP, and with the participation of the French Agency for Development, as well as local authorities, the project under development aims to link the communities  Jagua Castle and El Perché with the center of the city of Cienfuegos.

According to Marisol Otero Álvarez, director of the Fortress of Our Lady of the Angels of Jagua, National Monument, by turning this itinerary into a tourist product for nationals and foreigners, the idea confers an important value of use to both the tangible and intangible heritage treasured by this part of the geography in south-central Cuba.

In addition to the above and guided visits to one of Cuba's 18th-century military fortifications, the Jagua Route includes a visit to the nearby fishing community of El Perché.

Marisol explained that ten fishing families have been selected in that village. The purpose of the project is to visit their homes, to be present when they work in their fishing gear, in their boats; to learn how they prepare the meals that are typical of this place, she said.

Another option is the Jagua Fortifications trail. Historically, the defense of Jagua Bay not only included the fortress but also other cannon batteries, located in strategic sites studied by Engineer Joseph Tantete (builder of the military enclave in 1745) since his arrival in the area.

There is a trail that leads to Punta Sabanilla. Currently there is the Carbonell Battery, composed of two howitzers and all the factory work that is in perfect condition. In addition, the Pasacaballos Battery, said Marisol.

This route is an old desire, as it is part of a site of historical and cultural significance, such as the Jagua Castle, the only fortification of its kind that remains in the five provinces of the center of the island.

During the 17th century, that fortress stopped filibusters like Francis Drake, Jacques de Sores, Lorenzo Graff and others no less feared in the waters of the Caribbean; and in 1762, it occupied an important place in the history of Cuba, when it served as the headquarters of the Spanish military command in the face of the very brief English occupation.

More than two centuries after that event, the Fortress Museum Nuestra Señora de los Ángeles de Jagua was inaugurated there, a cultural institution in whose eight rooms visitors can learn about the socio-economic background and the historical-constructive development that led to the origin of the building.

In addition, objects related to  local history are exhibited, such as weapons of the time, fishing gear used by the inhabitants of the area, shackles, chains and handcuffs, among other pieces of great value, evidence of the material of the eighteenth and nineteenth centuries.